Supersonic! How to remix the Beatles' first two stereo albums 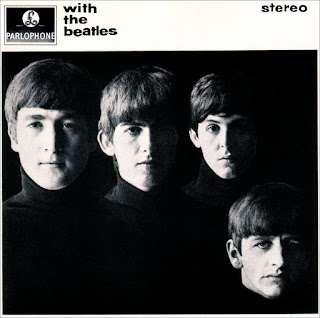 In 1963, the Beatles recorded Please Please Me and With The Beatles on two-track tape with the instrumentals on the left channel and the vocals segregated to the right. There is no "bleed" between channels.

"The reason I used the stereo machine in twin-track form was simply to make the mono better," explained George Martin in The Complete Beatles Recording Sessions. "I certainly didn't separate them for people to hear them separate!" 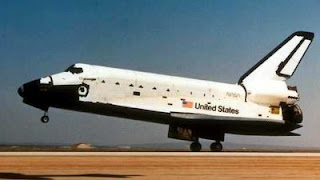 No kidding. The 1963 stereo mixes suck. You can land a Space Shuttle between the left and right channels. You can get an aneurysm listening to them on headphones. The torture is more acute in the age of digital music, where every instrument and voice is crystal clear.

But there's good news! We at the Rowboat Syndicate have solved the eternal "extreme panning" malady once and for all. Best thing is: anybody can do it.

All you need is the following:

2) Audio mixing software. I use an ancient version of Cool Edit Pro. All you need is software that separates each channel into LEFT and RIGHT, like this: 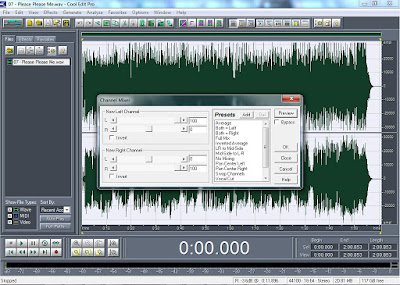 3) A good set of headphones, like Sennheisers, or stereo speakers to monitor your work clearly.

Let's start with Please Please Me, The Beatles' first song recorded in infamous two-track. Load PPM onto your audio mixing software. Then, go to the channel mixer (as shown above). You'll hear this:

Brutal, right? To reduce the panning, open the channel mixer on your software. This function lets you mix each channel, the left and the right separately. This is crucial. What you'll be doing is blending some of the right channel into the left channel, and mixing some of the left channel into the right. If you don't know what I mean, then, slide or key in the R in New Left Channel to 40, and do the same with the L in New Right Channel. Click preview and listen.

Depending on your tastes, you can further separate the channels by decreasing the percentages or you can blend them more by increasing those levels. I recommend going no lower than 25% or else the channels sound too far apart, and I wouldn't rise beyond 50% or else you're sounding like mono.

After a lot of trial-and-error, I've determined that the sweet spot for the faster rock numbers should be mixed around 40%, while slower ballads stay within the 25-30% range. The reason is that rock numbers pack a visceral punch when you toss all the sonic ingredients together into a giant lump, while channel separation lets you appreciate each instrument in a ballad.

To prove my point, mix Till There Was You at 30% blend:

Again, it comes down to personal taste. I find 25% too wide, and the mix draws attention to itself and detracts from the listening experience. Meanwhile, anything set higher than 30% and the instruments lose their distinction, particularly the guitar solo where each notes needs to be appreciated in detail.

Now, some of you may want Paul's vocal in the right channel to be more centered. Try this:

The only change here is setting the R in the New Left Channel to 60. What this does is blend 60% of the right channel (Paul's vocals) into the instruments of the left channel. Make sure to keep L in the New Right Channel at 30. Though Paul's vocal remains louder in the right channel, you now hear the illusion of Paul's voice centered in the mix and more dominant. Again, there is no right or wrong mix. You must find your own sweet spot.

And that's it. Keep these rules of thumb in mind as you remix the stereo Please Please Me and With The Beatles albums, as well as From Me To You and Thank You Girl.

What about I Want To Hold Your Hand? That was recorded in four-track with the vocals already in the center. More on that later...

Email ThisBlogThis!Share to TwitterShare to FacebookShare to Pinterest
Labels: audio mixer, George Martin, I Want To Hold Your Hand, mono, panning, Please Please Me, sound separation, stereo, The Beatles, with the beatles

As relevant as the Vietnam War: the Beatles' butcher cover 50 years later

This is the second in a series of features celebrating the 50th anniversary of The Beatles' landmark Revolver album. 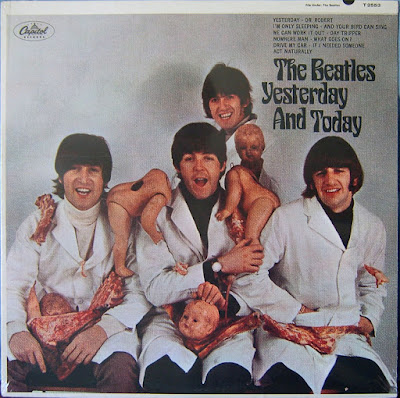 In March 1966, two routine events set the stage for The Beatles' annus horribilis: John Lennon's fateful interview with The London Evening Standard's Maureen Cleave where he pronounced "the Beatles are bigger than Jesus," and a routine photo session with Robert Whitaker.

Only it wasn't routine. On March 25, the Australian-born photographer collected The Beatles in a studio in London's posh Chelsea to pose them for a conceptual art piece entitled, A Somnambulant Adventure.

"I felt The Beatles needed a new approach with their image," Whitaker explained in The Beatles: An Oral History. Whitaker got George to pretend to hammer nails into John's head, each of them to wear bird cages over their heads and all of them to hold a strand of sausages. Whitaker got more carnivorous by draping the band in white butcher smocks and throwing slabs of raw meat and dismembered plastic dolls over them.

Fifty years later, it's not entirely clear how the infamous butcher image wound up on the cover of Yesterday and Today, but it sounds like the band (probably except George who detested the images) submitted the butcher photos to EMI and Capitol to promote their next releases, including the June 10 Paperback Writer single in the UK. 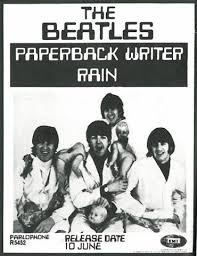 This ad first appeared in the New Music Express in the last week of May 1966, then on June 4 in Disc and Music Echo ahead of the June 10 release of Paperback Writer/Rain. A week later, the same magazine printed a colour photo on its cover, an alternate image beneath the headline, "What a carve-up!" The image raised a few eyebrows in Britain, but nothing more.

However, when the first printing of Yesterday and Today hit American records stores on June 20, it unleashed a firestorm and we all know what happened next: a costly, massive recall that resulted in unknown quantities of a generic cover slapped over the offending butcher cover, thus instantly rendering those copies collector's items.

"The original cover concept never really materialized," explained Whitaker. "It was meant to be a double-folded album cover where the front showed the four Beatles holding sausages, which would have stood for an umbilical cord." The link of sausages would connect with a woman in the inside gatefold to symbolize the birth of the Beatles and "all kinds of surreal, far-out images."

Well, that would have been different. Regardless, Whitaker was surprised that the butcher cover wound up on the front of Yesterday and Today and wonders if The Beatles sent Capitol the butcher image as a dark joke for this "filler" album.

If 1967 was the Summer of Love, then 1966 was the Summer of Hate. At least, for The Beatles. The year began pleasantly enough with the band getting an overdue rest after three non-stop years of work before recording Revolver in the spring. Three songs were pulled from the early sessions to pad out yet another hodgepodge that Capitol presented to Beatles' fans as their so-called "new" album.

Let's consider Yesterday and Today, which was released 50 years ago today. Sure, it's full of great songs, including Nowhere Man, Day Tripper, We Can Work It Out and the title song, but the collection is disjointed and ultimately unsatisfying. Stylistically, songs jump from the country-and-western Act Naturally and What Goes On to the psychedelic I'm Only Sleeping and the heavy guitars of And Your Bird Can Sing and Day Tripper. Yesterday and Today also suffers from an imbalance of voices: Paul sings lead on only three of the 11 songs, Ringo takes two, George gets one, and John the rest. If anything, Y&T is a survey of John Lennon's songwriting from 1965-6.

Capitol got away with this tawdry re-packaging in Something New and Beatles VI in 1964 and 1965 because the Beatlemania sound was homogenous over this period, but Y&T captures the Beatles in a period of rapid maturity. Only 12 months separate the releases of Help! and Revolver, but artistically The Beatles traveled light years in this time. Can you imagine Act Naturally on Revolver?

To be fair, every British Invasion group, including The Rolling Stones and Animals, suffered the same crass re-packaging of their music that routinely short-changed American fans (UK albums boasted 14 songs and no singles). Y&T was especially egregious. Yesterday, Act Naturally, We Can Work It Out, Day Tripper, Nowhere Man and What Goes On were already selling as 45s in American record shops when Y&T landed on June 20, 1966. That means that less than half of the album's music was actually new. Of course, Capitol didn't care. Y&T sold 500,000 copies in two weeks, and topped the charts for three weeks. 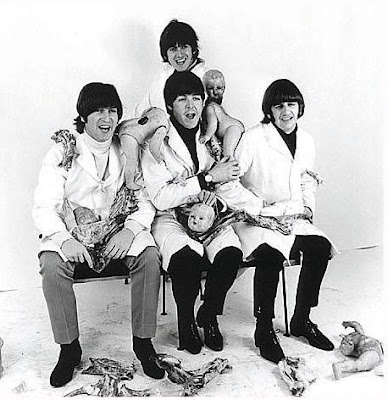 In 2016, Yesterday and Today is largely a nostalgia piece for North American baby boomers and a curio for later generations. Yesterday and Today symbolizes a pop band that suddenly outgrew its teenybopper image and was rapidly reshaping music. The butcher images that promoted the album and Paperback Writer were meant to sever the band from their cute moptop image. Sgt. Pepper would accomplish that with more subtlety and imagination 12 months later.


On a more important level, the butcher cover was the first of several controversies in 1966 that culminated in The Beatles retreating from concert stages forever and retiring Beatlemania for good. The Beatles were never the same after the summer of 1966.

They were a sardonic, cynical bunch, and the symbolism of peeling back the innocuous moptop image of Yesterday and Today to reveal the hidden butcher cover beneath is obvious. The mood of the era was darkening, too. By 1966, America was falling deeper into the amoral Vietnam War while its Civil Rights Movement was growing bloodier with riots and demonstrations.

The butcher cover, sneered Lennon was "as relevant as Vietnam."
Posted by The Doc and the Guv at 07:33 No comments: